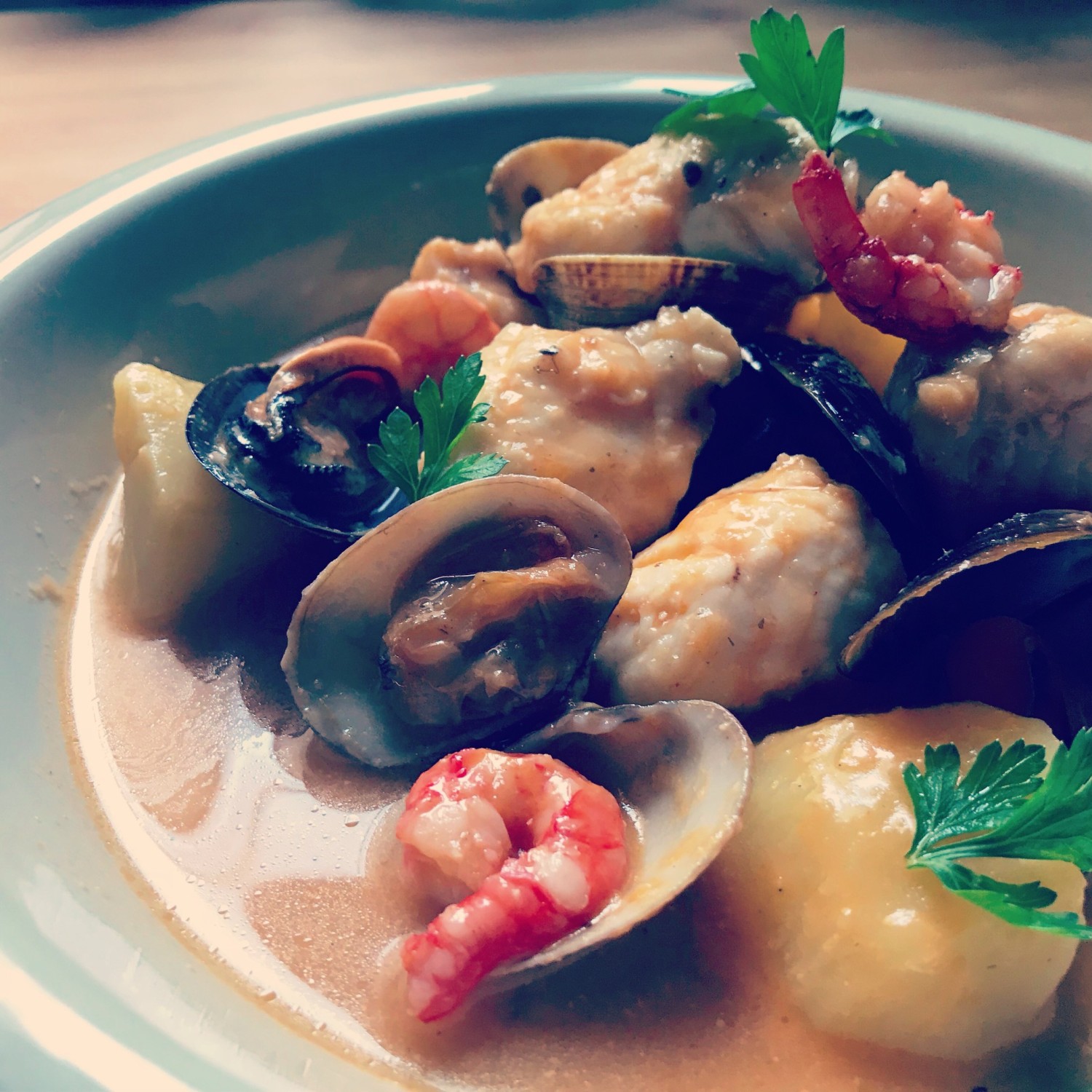 Suquet de peix is a traditional fish stew from Catalan, Balearic and Valencian coastline. There are many different recipes, some say as much as the fish you may find in the Mediterranean sea, and of course, each cook has its own prerogative. Like many traditional dishes, ‘Suquet de peix’ evolved from a much simpler version of itself, stemming from necessity, the urge fishermen had to nourish themselves after a long journey among nets. Simple as a fish soup and some potatoes. A fish stock prepared with the remains on their nets. A fish that was meant to be discarded, either because it was damaged,or because it didn´t match people´s consumption habits. Mainly small rockfish; too small to roast, or sear, with little meat, but a lot of bones instead and for this reason it made a super tasty soup, to which they added potatoes, that where filling and they slightly thickened the stock with  their starch.

Now, that’s how it started, but nowadays, we elaborate it a lot more. However, that is up to who is in charge of the cooking. The following recipe, is our own version at Cook and Taste, of this traditional fish stew made on a boat by hungry Spanish fishermen. We invite you though, to make your own variations, make it suitable for you and add your own personal touch. Buy whatever fish is local to you, avoid gluten or nuts, in case of dietary restrictions or allergies, use it as a guide, but please make sure you don’t overcook whatever fish you’re using, it’ll loose flavour and become chewy.

for the fish stock

Clean and coarsely chop the vegetables. Add them to a large pot to sear medium heat with olive oil. When they start sweating, turn to high heat and add the fish. Sear it too, and add the cold mineral water, parsley and bay leaf. When it comes to a boil, lower the heat to medium low. Skim the stock with a spatula and let boil for 20 minutes. Don’t be tempted to boil it for longer, the stock will acquire a bitterness. Turn off the heat and let infuse until it cools down.

A handful of roasted hazelnuts

for the stew (Suquet de peix)

500g of monkfish, cut in even portions (if too small it’ll overcook)

Peel potatoes and chop them the size of a walnut. In the same pot you seared bread and garlic, add the picada, a drizzle of olive oil and the diced potatoes. Sear until the outside layer is soft and slightly translucent.

Add the fish stock, strained and bring to a boil, cook until potatoes are soft, but still hold together. Add mussels, clamps, and monkfish, cook for 5 minutes until shells are opened. Add the prawns and cook for two extra minutes.

This stew gains texture and flavour within time, if wanted, you may prepare it a day ahead, or serve it straight away. You may also add some rice along with potatoes, ensure though you don’t overcook the rice.