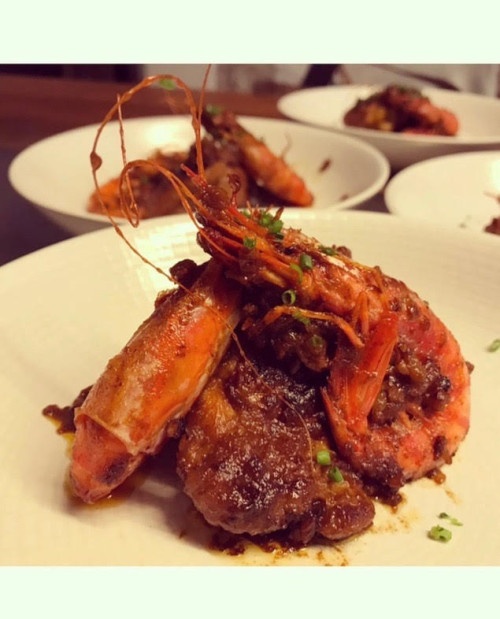 ‘Surf and Turf’ Chicken and Prawns Stew by Cook and Taste

If you’ve had the chance to travel around the Catalan coastline you have probably visited or Heard about l’Empordà, in the Girona province.  Well known by being the cradle of surrealism, and Figueres the hometown of Dalí, but you may also find historic villages scattered along its coast like Pals, Begur, Cadaqués, Peratallada, Tossa de Mar, among many more. Where Romanesque architecture and medieval remains will transport you to a fairy tale or a postcard. Locals love it for all that, and,  it’s exquisite cuisine. Todays recipe is local from Tossa de Mar, but shares origin in all empordà with small variations. ‘Pollastre amb gamba’ (chicken and prawns).

The day of the local festival, hosts prepared a lavish meal for their guests; they roasted a chicken or two if lucky! (which was at that time, early 19th century, was a luxury good), but typically more people than they expected showed up and to ensure everyone had enough to eat they added shrimps (which was understood as peasnt food).

The result was an absolute culinary pleasure, and for this reason we are sharing this recipe today. This is how we cook it at Cook and Taste.

for the ‘picada’ (a paste made with mortar and pestle)

a handful of roasted and pealed hazelnuts and almonds

an anchovy or anchovy paste if desired

Squeeze the garlic flesh in a mortar and add the rest of the ingredients along to make a paste and set aside.

Start by searing the prawns in a hot cast iron pan for about two minutes each side. Remove and set aside. Now add the chicken and sear it. In the meantime, cut the onion in small dices and grate the tomatoes finely. When the chicken is golden brown, add the onions, and a pinch of salt. Salt will dehydrate the onions and they will release wáter, which will speed up the caramelizing process, when all the water evaporates, deglaze with a drizzle of brandy and then add a drizzle of oil. Cook while constantly stirring until they brown , add the grated tomatoes and cook until totally evaporated and caramelised.  Cover the chicken with stock and cook medium heat for 15 minutes. after cooking for 10 minutes add the picada and the prawns and lower the heat.

Note that these stews gain flavour and texture after some hours. Even overnight!

Heat up to serve along with some bread to dipp in the sauce, and enjoy!!!!