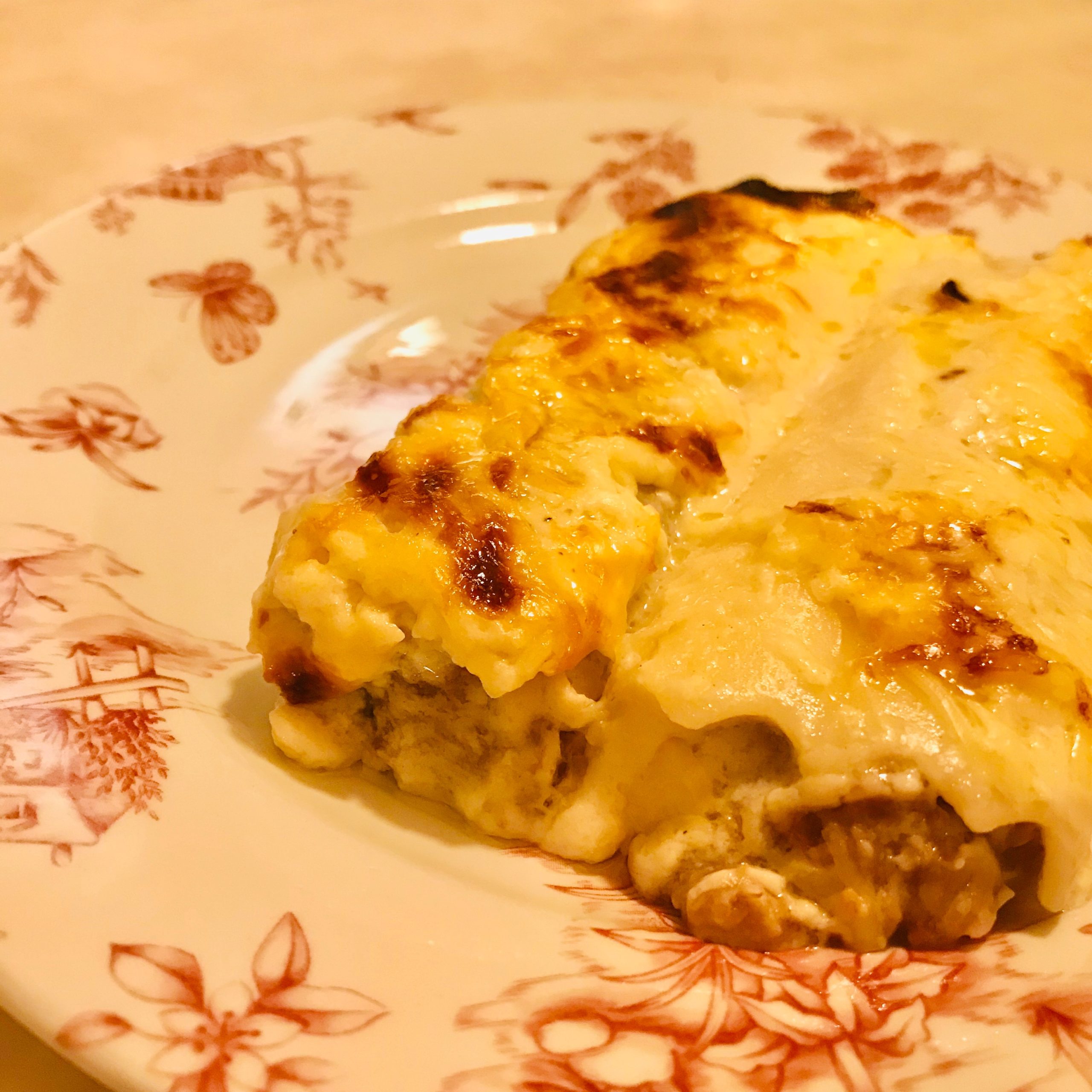 By Bego SanchisJanuary 2, 2019No Comments

‘A rectangular sheet of pasta stuffed with either meat, fish or vegetables, rolled on a tubular shape, glazed with Bechamel sauce and topped with grated cheese, and grilled in the oven..’

Canelón is a traditional Catalan dish, typically served December 26th, using leftovers of roasted fowl cooked for Christmas. Unequivocally the traditional Catalan dish has an Italian origin; during the XIX century, most chefs in Catalan bourgeoisie families where Italian, therefor they introduced some traditional Italian dishes. Canelons where very well accepted in the Catalan capital beeing served in many fancy local restaurants in the city.
The main difference between both Canelons is that in Catalan ones the meat is roasted, whereas in Italian ones the meat is stir fried along with a sofrito in a pan. This main difference is very representative of Catalan culture, Canelons where an exquisit way to use and serve any leftovers, not only of anything previously roasted but also all the meats from broths, deeply rooted in all Spanish gastronomy.

In present days, Canelons are a big tradition in Catalan cuisine. In fact many locals ignore that they are quite a newly acquisitions of our gastronomy. There are as many recipes as cooks. Meat, fish or even veggie Canelones are served around the Catalan and Spanish territory, but if there was one recipe to outstand from any other it would be the following.

Melt the butter in a pan over a medium-low heat, then mix in the flour and cook for 2 minutes. This paste is called a Roux and will thicken our sauce. Stir in the cold milk gradually and keep stirring until thick and silky. Season with salt, pepper and nutmeg.

Chop the veggies, as well as veal, pork and chicken meat into rough big dices.
Season meat with salt and pepper, and sear along with lard and a splash of olive oil in a cast iron casserole. Remove and set aside when golden brown.
In the same casserole, stir fry the veggies until slightly golden and add the meat already seared. Pour in the wine. Cover the casserole with a lid and cook for about 40 minutes or until the meat is well cooked and soft. Stir every once in a while.
Finally, add the liver, cut in slices and cook for 5 extra minutes.
Let cool down and remove bones and skin. Blend everything in a food processor.

Assembly
Mix together half of the Bechamel sauce along with the minced meat and place in a piping bag.
Boil the pasta for as many minnutes as it indicated in the packet. Strain out the water and place on a clean cloth, one beside the other on a flat surface (table/counter)
Pipe in the filling from side to side in the upper part of the sheet and then wrap the pasta around it ensuring the seam is always at the base of the caneló. Do so with all the canelons.

Place on a baking tray and cover with Bechamel, grated cheese and dices of butter.
Grill at 200ºC until golden brown and crispy. Serve straight away and Enjoy!

This website uses cookies to improve your experience while you navigate through the website. Out of these cookies, the cookies that are categorized as necessary are stored on your browser as they are essential for the working of basic functionalities of the website. We also use third-party cookies that help us analyze and understand how you use this website. These cookies will be stored in your browser only with your consent. You also have the option to opt-out of these cookies. But opting out of some of these cookies may have an effect on your browsing experience.
Necessary Always Enabled
Necessary cookies are absolutely essential for the website to function properly. This category only includes cookies that ensures basic functionalities and security features of the website. These cookies do not store any personal information.
Non-necessary
Any cookies that may not be particularly necessary for the website to function and is used specifically to collect user personal data via analytics, ads, other embedded contents are termed as non-necessary cookies. It is mandatory to procure user consent prior to running these cookies on your website.
SAVE & ACCEPT