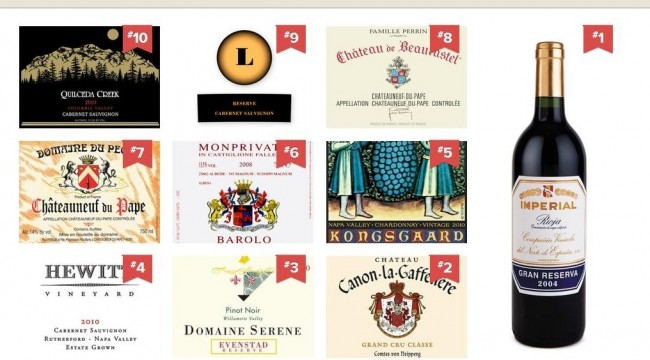 By Bego SanchisDecember 2, 2013No Comments

We’re so glad to find an Spanish wine on top!

This year marks the 25th anniversary of their Top 100 list, where Wine Spectator’s editors select and highlight the most exciting wines from the thousands they reviewed during the course of the year.  In 2013, editors reviewed more than 20,000 new releases, and the Top 100 includes wines from 13 foreign countries and four states.
As always, they select the Top 100 based on quality (represented by score), value (reflected by release price), availability (based on the number of cases either made or imported into the United States) and an “X-factor” they call excitement. However, this year they have given more emphasis than ever before to the X-factor—the intensity of interest the wines excited by way of their singularity or authenticity.
These 100 selections include more bottlings off the beaten path and represent the producers and wines our editors were particularly passionate about in 2013. Overall, the average score of the wines in this year’s Top 100 is 93 points and the average price $51—an impressive quality/price ratio.

Over the past 20 years, Spain has experienced a dramatic upheaval in its deeply rooted wine industry. The epicenter of this revolution in style and character has been the country’s most prestigious wine region, Rioja.

Beginning in the 1990s, a vigorous debate pitted traditionalist bodegas against a new wave of vintners. Should Rioja maintain the supple, elegant style that had flourished since the early 20th century? Or adopt a richer, more structured approach more in harmony with the world’s other great reds?
Though the polemics have been fierce, a few producers have found a middle ground that is rooted in history yet open to innovation. Among them, the benchmark bottling, for its pedigree and consistency, may be the Cune Imperial. “I feel Imperial falls in the middle of the traditional/modern divide,” says Cune CEO Victor Urrutia, a member of the family that has owned Cune for five generations.

Mediterranean wine culture was, in the Middle Ages, closely linked to the monastic life, as their major broadcasters were the monks. This area of Spain has over 500 wineries and is internationally famous for the quality of its wines.  Learn about La Rioja

Cune (an acronym for Compañía Vinícola del Norte de España) was founded by brothers Eusebio and Raimundo Real de Asúa in 1879. Now one of Rioja’s most important wineries, Cune was among the 19th century producers that helped define classic Rioja, growing several grape varieties (predominantly Tempranillo), fermenting and blending the wines in large wooden or concrete vats, and then maturing them in barrel for many years before release.
The wine itself has maintained a consistent character. Imperial is rarely aggressive or musclebound, but it doesn’t lack structure or grip. New oak never protrudes, nor the oxidation that can result from excessive barrel aging. There is ripe fruit, but it is framed by spice and mineral notes. The wine never seems too young or too old.
For its ability to balance past and future in such delicious harmony, the Cune Imperial Rioja Gran Reserva 2004 is Wine Spectator‘s 2013 Wine of the Year.
Tasting Note: Firm and a bit austere, this red shows depth and drive, with chewy tannins supporting plum, tobacco, licorice and mineral flavors. The structure is solid but the wine remains fresh. Maturing now, this has a long life ahead. Drink now through 2024. –Thomas Matthews
Special Designation: Highly Recommended
Region: Rioja, Spain
Issue Date: Sept. 30, 2013
More information in Wine Spectator